How To Recall Names

It was the worst moment of Steve’s life. At least, it felt like it.

He introduced his major new client to the CEO and he couldn’t remember the client’s name!

It damaged Steve’s credibility.
It made his boss wonder if Steve’s getting too old for his role.

That was a bad moment for Steve. And it can be a worry for you too.

Here’s how Steve put it,

‘There are certain people I see quite often, but I might be sending them an email or talking to them in person, and I can’t remember their name’.

This is SO frustrating!

And, because it is so public, forgetting names is one of the most embarrassing ways your memory lets you down. It is seen as a sign of age. 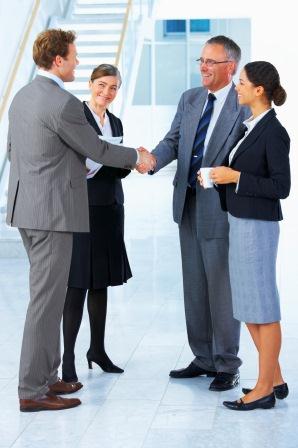 Is it normal to forget names?

Memory changes in your 50′s and 60′s are usually quite normal.

And as I say, over and over, normal, but NOT acceptable!

People who forget in public lack confidence.
Forgetting makes them seem older, uncertain and not up with the play.
And you don’t need to accept that image for yourself.
No matter what age you are.

Your memory does change in a few specific areas around the age of 50 but there are ways of making sure that no-one else notices.

So what can you do? Start learning techniques like this one:

How does it work?

There are quite a few steps but, in reality, it takes only a minute or two. The SECRET is staying alert though the sequence.

Make sure YOU are in control. It’s a simple strategy. AND. IT. WORKS.

It works because you are listening carefully and giving the face, name and details multiple ways of being encoded into your long-term memory.  Then, when you want to recall the name later, you have more than one cue and association to bring the information to mind.

If your mind wanders or you are thinking of something else at the same time as you are being introduced, your brain will discard the name within a second or so. And you forget!

Step 8 of How to Recall Names is the bonus step for your brain. Recall and repetition are the friends of a good memory. Practice!

You will remember names

You will exercise, rebuild and strengthen an important part of your brain

And your alert and youthful brain will impress your friends!

Congratulations on completing your Memory Check and just two of the 16 strategies you need.

Your free mini-course has given you:
1. Your Memory Check (you can use this over and over)
2. How to remember where you have left your car keys (and other things that ‘vanish’!)
3. How to remember names and create memory traces

Imagine the difference all 16 memory strategies will make to your life.

We have a special offer coming in your next email – don’t miss the chance to master the other 14 memory skills.