Move It or Lose It!

Can exercise REALLY alter the structure of the brain? 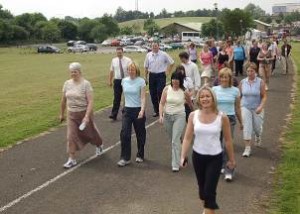 And keep Alzheimer’s away?

Stephen M. Rao, a professor at the Schey Center for Cognitive Neuroimaging at the Cleveland Clinic, oversaw s study of almost 100 older men and women, aged 65 to 89, many with a family history of Alzheimer’s disease.  About half of the group carried the e4 gene which appears to indicate a higher risk of Alzheimer’s.

The scientists divided their volunteers into four groups, based on their e4 status and exercise habits.

The scientists then scanned their volunteers’ brains twice, eighteen months apart, with particular emphasis on their hippocampi.

The results were stunning.

Members of the group carrying the e4 gene who did not exercise had an average 3% shrinkage of the hippocampus.

Volunteers with the e4 gene who regularly exercised showed almost no shrinkage of their hippocampus.

Dr. Rao: There’s good reason to tell people to exercise to protect their memories. Many of us do not carry the e4 gene, but everyone has some chance of developing Alzheimer’s disease. And if exercise reduces that risk in any way then why not get up and move?