An Argument Against Ageism

Psychologist Raymond Cattell developed the concept of fluid and crystallized intelligence in 1963.

Fluid intelligence is the ability to solve novel reasoning problems and is correlated with a number of important skills such as comprehension, problem solving, and learning.

Fluid intelligence also peaks around the age of 20 and slowly declines thereafter.

And the wonderful thing for those of us of a certain age, is that crystallized intelligence peaks at around the age of 65. 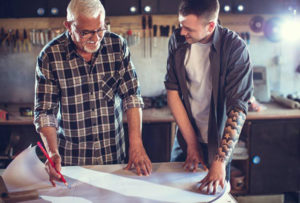 The lesson here: older folks may have experienced declines in their ability to rapidly learn and master new skills, but we are the best when it comes to taking what we’ve learned over decades and applying those skills. Moreover we are generally exceptional leaders and teachers.

No organization can thrive if it is poorly led. Often older people are the best leaders and managers.

I’m not a psychologist.

But I have been around a while. At the age of 55, I know I am a far better leader, far less impulsive and, in short, a better choice for leadership roles than I was in my 20s and 30s.

To thrive, all organizations need a blend of fluid and crystallized intelligence. Having too much of one and not enough of the other will lead to suboptimal results.

I have written other essays on leadership and I firmly believe that leadership experience and ability is often relegated to the “nice to have but not necessary” bucket.

Instead hiring managers fail to adapt when filling a leadership role. Rather than evaluate someone for their ability to lead effectively, they consider whether that person has whatever specialized skill is needed for those being led and how the applicant has performed at junior levels. Often it is assumed that someone good at — say — retail will just figure out the leadership stuff.

Often this doesn’t work out.

High levels of crystallized intelligence are good indicators of potential success when hiring for leadership roles.

Moreover I think older people are often deemed as less effective AND more costly than a younger hire. This gross generalization of course depends on the role. Just as you wouldn’t typically hire a 21 year old as a senior executive, you’d prefer to leverage the older applicant’s experience and hire at a higher level — with commensurate pay.

In other words, you pay for the role, not the person’s age.

Thus in hiring an older person for a senior leadership role (for which that person is qualified) you are paying for the experience and the crystallized intelligence that person brings to the role.

It takes two (types of intelligence)

Most organizations need plenty of both: problem solvers who are adept at working out tough problems in ambiguous environments and people who can provide the team direction, vision and cohesion.

Ideally hiring managers will be very aware of what each role they are hiring for requires and will be adept at finding a match.

Merely writing off an applicant due to age — assuming that age = decline and subsequently suboptimal performance — is a mistake. Yet this happens often.

Likewise promoting a young, inexperienced person into a leadership role, due to their exceptional fluid intelligence may be a mistake. Yet this happens often.

To be sure, young inexperienced employees need leadership opportunities, but in my experience they are often thoughtlessly promoted to leadership roles that may be beyond their level of experience.

Because they perform well in a particular technical role, they are dropped into a leadership role. Leadership roles, as we have alluded, require a different set of skills and “intelligence” that one develops over time.

This mistake, made often, will undermine a company’s performance.

Companies need to hire for both types of intelligence. The ratios differ depending on what a company produces or provides, but hiring managers who default to the stereotype that old workers offer less value at higher cost, are missing an opportunity. Specifically an opportunity to optimize productivity by interlacing crystallized intelligence with fluid intelligence in a smart and effective way.

This despite the generally accepted view that older workers, who have the requisite experience for the applied for position, are peaking in their ability to teach, lead and manage.

Yet our internal biases often lead us to reject these people for their age rather than seeing them for what they are: excellent leaders for key roles in our organization. Leaders who will help the organization maximize quality and productivity.

If you are in a position to hire an older worker, please consider the fact that we are at our crystallized intelligence peaks!

We’d love to hear your thoughts on this article! Please share them in the Comments.