Is hearing loss affecting your memory?

Hearing loss is very common and it affects people of all ages.

Hearing loss is usually gradual. In the beginning, it takes away the beginning of the sentence, the little details and the punchline. With time hearing loss increases mental fatigue as you concentrate harder just to follow along. Your confidence erodes as you are no longer sure about what was said. You feel embarrassed about missing details or having to ask for repeats too often.

Hearing loss is invisible and sneaky.
As hearing changes, we adjust.
Gradually it affects personality and relationships.
Hearing loss changes us over time.  Maree O’Sullivan

In 2013, Frank R. Lin, MD, Ph.D observed 1,984 adults over the course of six years, tracking the progression of hearing loss in relation to cognitive function. He found that hearing loss is a factor in loss of mental acuity in older adults.

The exact link between hearing loss and cognitive decline is not yet fully understood; a possible cause is the increased “cognitive load” caused by the brain being overwhelmed by demands on its limited resources.

When close concentration is needed to follow a conversation, there are less cognitive resources for other things like memory and maintaining balance.

“Communicating when you have a hearing loss, takes up lot of brain-power. It’s a bit like a computer that runs more slowly when there is a large program running in the background.” says Maree O’Sullivan, Audiologist. 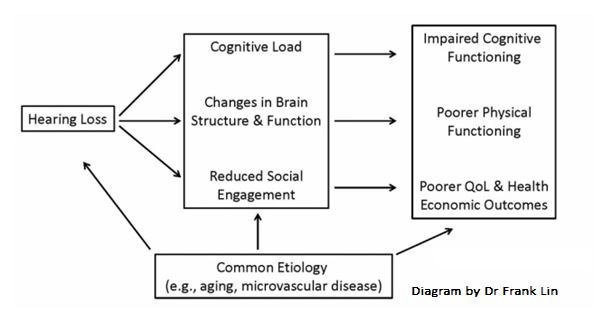 As evidence continues to mount that hearing loss is a contributing factor in the development of memory loss and dementia, ignoring hearing loss may have profound consequences. On average, people wait ten years before they seek treatment for hearing loss.

“Considering early diagnosis and medical intervention of hearing loss slows the progression of dementia and Alzheimer’s disease, it is more important than ever for patients to get their hearing loss treated sooner rather than later,” said Maree O’Sullivan.