Is it Dementia or Alzheimer’s? 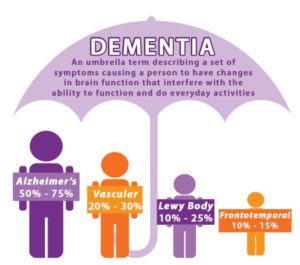 You’re not alone!
As more and more people are diagnosed with brain disorders, the terms dementia and Alzheimer’s are bandied about.

But what do they mean?

Dementia is the overall term that describes a group of symptoms affecting the brain which interfere with thinking, social skills and the way a person functions in everyday life.

Memory loss is one of the symptoms you might notice but memory loss alone doesn’t mean you have dementia.

At least two brain function symptoms would need to occur for dementia to be diagnosed.

Dementia has several causes or ‘types’.

The ‘type’ will depend on the area of the brain most affected.

Alzheimer’s is the most common ‘type’ of dementia in people over 65.

Alzheimer’s usually progresses slowly over 7 to 10 years involving a gradual decline in memory skills, language, judgement and spatial abilities. This video demonstrates clearly how the brain connections decline as Alzheimer’s produces plaques and tangles in the brain.

Dementia has several other causes, or ‘types’ as well:

The articles will give you further help and information about preventing Alzheimer’s, helping people with Alzheimer’s and to answer the question: Is it Alzheimer’s? Further individual help may be gained from Dr. Allison Lamont at The Auckland Memory Clinic