Turn Down the Radio! I’m Lost.

Why do you do this? 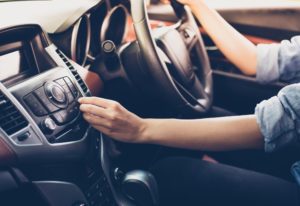 You’re driving, looking for the street where you’re supposed to meet your friend for dinner.
You slow down to a crawl, turn down the radio, stop talking, and stare at every sign.

Hearing the radio or talking doesn’t affect your vision.

Dr. Steven Yantis, a professor in the Department of Psychological and Brain Sciences at Johns Hopkins University, had this to say (he was talking about using a mobile phone while driving):

“Directing attention to listening effectively ‘turns down the volume’ on input to the visual parts of the brain. The evidence we have right now strongly suggests that attention is strictly limited — a zero-sum game. When attention is deployed to say, talking on a mobile phone it necessarily extracts a cost on the visual task of driving.”

He’s talking about divided attention, or the way we try to multitask and pay attention to two things at once.

In fact, psychologists tell us that we don’t do two things at once. We frame our thinking for one task then, to switch to another activity, we have to reframe our brain connections for the second task. This happens in fractions of seconds but still the processing power needed is exhausting your cognitive reserve. Frequent changes of focus can be mentally exhausting.

Your capacity for paying attention can be affected by

NB: Dr Lamont says that many memory complaints may actually arise from anxiety, depression or are fatigue-related.

It’s SO much harder to focus on two things at once accurately than when you are using selective, or focused, attention on one activity. If you really need to multitask, there are steps you can take, though.

How to Divide Your Attention More Effectively

So, it’s natural to turn down the volume when you’re lost. By doing that, you are allowing more of your brain to focus on your mission — to find dinner!