Did you know that people who 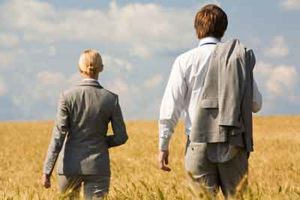 had better short-term recall of past events than those who walked forward or sat still.
(Study reported in the January issue of Cognition)

‘That’s still something of a mystery’, says Dr. Daniel Schacter, Professor of Psychology at Harvard University. ‘It’s possible that people associate going backward with the past and this somehow triggers a memory response. ‘We know it can’t have anything to do with how they’ve encoded the information, [because] people weren’t walking backward when they stored the memories tested in this study.’

Testing the effects of motion

Researchers tested the effect of backward movement on memory with 114 people who saw a video of a staged crime, a word list, or a group of images and were then asked 20 questions.  They then asked the participants to walk forward, walk backward, sit still, watch a video that simulated forward or backward motion, or imagine walking forward or backward. The participants then answered questions related to the information they saw earlier.
They found that people who walked backward were significantly more likely to answer more questions correctly, regardless of how old they were or other factors. On average, the boost in memory lasted for 10 minutes after people stopped moving.
The findings suggest that this motion strategy might be a means of helping people better recall past events.

Dr. Schacter says backward motion could one day be added to existing techniques already in use to boost memory. One such method is called a cognitive interview. (A technique that helps people to recall details of a recent event by metaphorically walking the person through the event forward and backward.) It’s possible that literally walking backward may do something similar in the brain, he says.
The study authors said that future research will look at whether motion-based memory aids could help elderly adults or people with dementia.
Will walking backward help boost your short-term memory?

“This study would suggest that there are some circumstances where this might be the case,” says Dr. Schacter. “It may be worth trying.”

Find out much, much more about improving your memory. Memory Tune is your step-by-step guide to how your brain works along with strategies for new brain habits to sharpen your brain and memory performance.
Based on the research of Dr Allison Lamont, PhD.

Do you have a story to share? Do tell us below.