Brain Quiz – are you up-to-date?

You know a lot about your brain – right?

Scientists are discovering more each day it seems.
Are you up-to-date?
See how you go on this quiz!
(Click under each question to check your answer.)

1. My brain can juggle more than two conscious tasks at once.

False. Your brain doesn’t really do several tasks at once when you ‘multi-task’. Because switching takes time, multi-tasking isn’t a very effective or efficient way to work.

2. The bigger a brain is, the smarter you are.

False. A bigger brain doesn’t always mean bigger thoughts. In fact, human brains were larger back when we were living in caves, but our bodies were also larger then. As we evolved, more the space in our brains became used for complex processes such as language, thinking and memory.

3. What surprised scientists about Einstein’s brain?

d. Certain lobes of his brain appeared larger than normal.  A 1999 study of Einstein’s brain, based on photographs taken of it after he died in 1955, showed that the parietal lobes, which are linked to maths ability, appear 15% wider than normal. But the size of his whole brain was a little smaller than average..

4. How much does your brain weigh?

(b).1.4 kilograms (3 lbs). We may be the smartest creatures on the planet, but others have bigger brains. Larger brains are needed partly to control larger muscles. A sperm whale’s brain weighs about 7.7 kilograms (17 lbs) and an elephant’s weights a little more than 4.5 kilograms (10 lbs).  An owl’s brain weighs 0.002 kilograms (0.005 lbs) and a frog’s about a tenth of that.

True. When researchers looked at brain scans of Buddhist monks meditating, they found that the parts of the brain that help people concentrate and make decisions became more active. The burst of activity was very strong in young monks learning to meditate, and was smaller in monks who had meditated more. This could mean the older monks’ brains had learned to focus more easily.

7. For most people, the left side of the brain is used for:

(a) Language. The two sides of your brain, called hemispheres, look almost identical. But they handle different tasks. When you form words or do maths, you use mostly the left side. Face recognition, spatial abilities, and music are primarily tied to the right side.

8. The more you use your brain, the stronger it grows.

9. Which of these raises your chances of having a stroke?

10. How do brain cells signal one another?

(a). People who ensure they have rich, active lives show much less decline in both memory and thinking abilities. Many older people outperform much younger people in mental abilities, including memory. The old adage “Use it or lose it” definitely applies to memory.

(b) The cell bodies of neurons. Grey matter includes neuron cell bodies in the think outer layer of the brain. White matter appears white because it contains nerve fibres coated with a sheath called myelin. The sheath allows neurons to send messages faster.

12. How much of your energy does your brain use?

c. 25%. Your brain is only about 2% of your body weight, but brain cells use twice as much energy as other cells in your body.  Brain cells are always active, even when you sleep.

13. How many neurons (brain cells) do you have?

c. 100 billion. The average adult human brain has about 100 billion neurons. Linked by synapses, each brain cell can connect to thousands of other brain cells. It is still a mystery exactly how these connections work together to create all the marvels of our brains.

14. A good night’s sleep allows your brain to store memories.

14. Brain cells generally live longer than other cells in the body.

True. Brain cells are the longest living cells in the body. Research show that we are able to grow new neurons but most of our brain cells are present from birth to death. The wiring of these cells and the way they connect each other changes constantly through our lives.

15. Which images register most strongly in the brain?

a. Faces. Studies suggest that your brain is aware of subliminal, or hidden, messages even when you aren’t. Human faces expressing emotions such as smiling or frowning seem to have the strongest impact. Words are weaker at conveying hidden messages.

b. Being somewhere new that resembles a place you remember. Scientists are still puzzled about why people have déjá vu – the feeling that you’ve been somewhere or done something before even when you haven’t. New research suggests that déjá vu occurs when people are somewhere that’s similar to a place they have been or do something similar to something they did before. For a moment, they mistakenly think they were there or did it in the past.

Keep being curious about your brain and the way it works for you.

And keep up your daily brain challenges!

For more free help and personal advice on how your brain works, What do areas of the brain do? and Was this Deja Vu?, check other articles Memory.Foundation. Or Contact Us. We’d love to hear from you and we always answer queries.

Have you bought your copy of 7-Day Brain Boost Plan yet? Sold out of its first two editions, this best seller is available again and will give you the answers you need! Here is Gillian Eadie being interviewed on Breakfast, with Rawdon Christie from TVNZ. 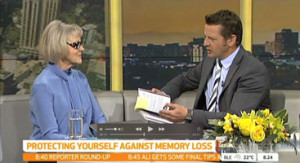 Were any of these Brain Quiz answers a surprise? Do you have an interesting brain fact to share? Please leave a comment for others to enjoy.