Not when it comes to recognizing faces, no. 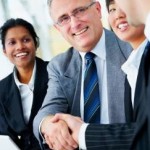 And VERY easy to copy.

It’s all to do with HOW women study facial features

And HOW LONG they spend doing it.

Here’s a summary of the study:

Using eye-tracking technology, scientists Heiszl, Pottruff and Shore found that females spent longer looking at each facial feature when recognizing faces combined with a detailed original ‘look’ to take in details of the whole face.  To find this out, people studied 10 faces on Day One, 10 new faces on Day Two as well as the 10 from Day One. On Day Three they were shown a total of 30 faces (10 from days One and Two and 10 new ones). Finally, on Day Four, a total of 40 faces were shown, including 10 new ones.

Increased accuracy in recognizing faces occurred in both groups the more often they were seen.

There is GOOD news though.

The more familiar men became with the faces, the less difference there was in male and female responses.

So what are the lessons for all of us?

Give yourself some 2-minute practice. Try recognizing these cats!

(You can make this full-screen here)