You’ve forgotten where you left the car keys or whether you turned the iron off before leaving home – both familiar predicaments often referred to as a ‘senior moment’.

But Auckland-based brain training expert Gillian Eadie believes it is wrong to think of it that way: “It’s actually a tragedy because neuroscientists now know that new dendrites (tree-like microscopic pathways passing information to neurons in the brain) grow for the whole of a person’s life when the brain is challenged.”

She says while it is easy to excuse a lack of mental effort on ‘having a senior moment’, forgetfulness may actually come about because people who are getting older expect to lose memory.

“People think they’ve lost their memory, but they haven’t. They’ve just lost some of the agility in connecting to stored information; the brain has the ability to function healthy right to the last days of a person’s life.

She says the brain needs to be challenged to keep neural pathways active – and activities such as cryptic crosswords or taking up new pursuits like golf or bridge can be ways of doing so.

Helping people develop skills designed to keep vital connections active and growing is the focus of Eadie’s work as director of the Memory Foundation, an organisation she co-founded in 2008 with her sister Dr Allison Lamont. The foundation runs the brain training courses through its BrainFit programme established following Lamont’s PhD research into the effects of ageing on memory.

Eadie, a former secondary school principal who has also chaired the University of Auckland’s Human Participation Ethics committee, says their work is producing good results with most who do BrainFit courses showing marked improvement in their cognitive skills.

Internationally there is still some debate over the effectiveness of brain training, especially in its ability to slow the onset of conditions like dementia.

In the UK the Alzheimer’s Society says while no studies have so far shown brain training prevents dementia, others have found that cognitive training can improve some aspects of memory and thinking particularly for people who are middle-aged or older.

And in a 2019 report the Harvard Medical School in the US said that while the long-term benefits are still being debated, brain games that help improve brain skills can play and important role in maintaining overall brain health.

Eadie says that while most people won’t get dementia “sadly a lot live as if they will and (as a result) limit their productivity, confidence and independence”.

She says training the brain is a bit like going to the gym: “You may join but if you don’t go or keep exercising you won’t get fit. In a way, the same thing happens with the brain”.

She says research shows brain function will benefit when people do things outside their comfort zones. Crosswords are a good activity, but if you can whip them off in ten minutes it may not be so helpful,” she says. “So instead it may be time to do a cryptic crossword or take up bridge, golf or join a choir – something that is new and challenging.”

Eadie says there are many lifestyle strategies people can follow to keep brains active – among them a striving for learning, taking care of nutrition, not skipping on sleep, developing and maintaining friendships, making your own decisions and mistakes by not “outsourcing” your brain to others, and laughing out loud often.

She says there are many misconceptions about brain training, particularly among older people who think it is only needed when something goes wrong.

In fact, she says, cognitive decline begins for most people around the age of 37: “From the 40s on distractions become a huge part of the way we live – it’s estimated, for example, that we interact every day with around 34GB of data – and trying to do too many things at once is one of the enemies of memory.”

“The effects don’t usually show until people reach their 50s and 60s,” she says. “We have a lot of people in their 40s and 50s doing our courses and I believe people would get the most benefit by starting at these earlier ages.”

Article was originally published in the New Zealand Herald’s Plus Magazine. June 24, 2020 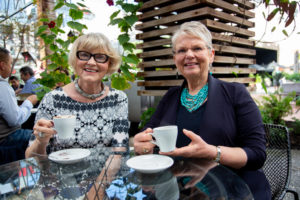