How does your brain ‘learn’?

All your life, you have been learning.

You know how to do an amazing array of things – some you won’t have thought about for years! (But that knowledge is till there, just waiting to be needed again ….)

You take your brain – and how it learns – for granted.

BIG MISTAKE! (Especially if you’re over 50.)

Because the plasticity of your brain strengthens when you learn something new.

What is plasticity again?

Neuroplasticity, or brain plasticity, refers to the brain’s ability to CHANGE and GROW throughout life. The human brain has the amazing ability to reorganize itself by forming new connections between brain cells (neurons).

Imagine picking up the cello for your 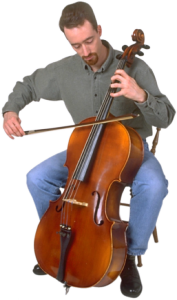 Your brain has a lot to do!

This sequence is what neuroplasticity is all about.

When you first picked up the cello, it felt unfamiliar, awkward and clumsy. You would certainly make mistakes.

But with repetitive practice, the neural pathways in the brain devoted to your finger movements start firing together over and over in the same pattern as you finger the strings.

Those scales may seem repetitive and monotonous, but specific brain circuits are working hard to carry the sequences with ease.

This is how you learn.

The point to point connections between two neurons (the synapses) become more numerous and stronger the more you practise.

Research shows that a lifetime of learning a cello, violin or any other intensive learning reorganises the brain. Stringed instrument playing has been studied by neuroscientists because they

can see how two hands, with entirely different tasks, affect brain organisation. Because the left hand must be supple and move quickly and independently, while the right hand mostly just holds the bow, the right side of the brain (which controls that busy left hand) is mapped quite differently from the left side.

The musician’s auditory cortex, the hearing part of brain, would also be well developed after a lifetime of differentiating between sounds and musical notes.

Want to read the whole study?

Interestingly, as professional musicians age their brains are slightly less susceptible to age-related changes to the brain.