How Nature Helps Us Heal

Here’s one silver lining to the pandemic: with gyms, museums, and stores closed, many of us were forced to spend more time outside. I was able to ditch my car and more safely pedal the 3.5 miles on pedestrian-friendly streets to work at Alta Bates Summit Medical Center in Oakland, where I work practicing hospital medicine. 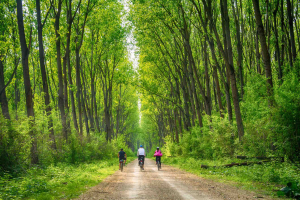 One morning last spring, I was reflecting on how good the ride outside made me feel when I walked in to see a 68-year-old patient with several significant behavioral and medical problems.

Before I could say a thing, he jumped in as if in mid-conversation. “Dr. Hass, I can’t thank you enough. I swear that prescription you gave me mid-COVID lockdown saved my life!”

Nodding, I tried to hide the fact I didn’t recognize him; I assumed he was talking about an antibiotic or some other medicine.

“I was so depressed and isolated,” he said. “You gave me a prescription to ride my bike to the marina and watch the sunset. I have been watching that sunset almost every day until I got sick last week. And the prescription is still on the fridge! I can’t thank you enough!”

That rang a bell. I have been giving out old-school paper prescriptions for about two years now, where I prescribe non-pharmaceutical steps that have been proven to make people healthier. Apparently, I had given him one to get outside and take in the natural beauty of the sunset.

I had heard that nature can make people happier and healthier, but, embarrassingly, I envisioned it for more “outdoorsy” people like me, whatever that means. Also, I assumed it would offer just a slight bump in the happiness quotient.

Mr. T. had shown me that I had underestimated both the impact of getting outside and who could be helped. As a result, I became determined to dig a little deeper to understand the health benefits so I could do more with these prescriptions.

Nature is good for us

Luminaries like Charles Darwin, Henry David Thoreau, Virginia Woolf, and Albert Einstein have written eloquently about the benefits of taking in the natural world. Frederick Law Olmsted, the 19th century architect of many great American parks, captured the experience well:

Nature employs the mind without fatigue and yet enlivens it. Tranquilizes it and enlivens it. And thus, through the influences of the mind over body, gives the effect of refreshing rest and reinvigoration to the whole system.

It took almost 150 years, but science has verified that statement almost word for word, including by researchers associated with the Greater Good Science Center. While much of the research has been done in the U.S., Japan is where the science has been most readily embraced. Starting with research on blood pressure and stress hormone levels in the early 2000s, there is now a medical specialty in forest bathing—an activity in which more than a quarter of Japanese partake. There are nearly 100 officially sanctioned forest baths where the benefits have been demonstrated, with guides to help visitors get the most from their time. In Japan, the director of the ministry of forestry is a social scientist, not a botanist, which hints at the country’s commitment to health-through-nature. Trees are seen more as a mental health resource than one that can be extracted for profit.

What are the benefits? According to research: lower blood pressure, heart rate, and stress; improved mood and immune function; better sleep; and increased creativity. There are surprising social benefits, too. During early forest bathing experiments, physician Qing Li found that after a couple hours in the woods, blood pressure went down an average of five points. The effects didn’t end once people left the trees; stress hormones were measurably lower for a week. After three days with two hours of forest bathing, markers of immune health showed improvement that lasted a week. And, of course, almost all the people said they just felt better, too!

We are primarily visual creatures, so it is not surprising that simply looking at beautiful natural scenes makes us feel good. A heart surgeon at Vanderbilt suspected it did more than that. Looking at it closely, he found that his patients whose hospital room faced the forest healed faster than those who faced the parking garage. I never knew why hospitals are full of nature scenes until I researched for this project. Strange that this bit of data reached the architects, but not the doctors!

Nature is, of course, an all-senses experience. It’s not just about looking at the trees—you can smell them, too, and hear the wind in their branches, and touch their bark. Li’s group found that when people slept overnight breathing in essential oil from the Japanese cedar tree, they reported better sleep and had lower stress hormone levels. Since then, researchers at Vanderbilt have demonstrated nurses report less stress if this same oil is infused in their hospital workplace.

Sound researcher Joshua Smyth at Penn State has found that when people listen to songbirds, the tension in their nervous systems falls, as measured by heart rate variability; but tension increases with the rumble of cars and roar of airplanes. Researchers with the Nation Park Service found their parks “look” worse when people hear human-made sounds. That kind of urban noise can be more than an irritant: Research in Bonn, Germany, found that kids at schools subject to a lot of airplane noise have a tougher time learning than those in schools across town.

Why nature is good for us

So, why is the natural world good for us?

The biophilia theory suggested that since we evolved in nature, our senses and body rhythms are best suited for that environment. According to biologist E. O. Wilson, there is an “innate emotional affiliation with other living organisms” that makes us calm and comfortable in nature. The sounds, smells, sights are our evolutionary “happy place” where we can rest and rejuvenate. We are deeply tied to a world from where we have strayed. Despite the comforts and safety of the modern world, there is a price to pay for urban living.

Other scientists espouse something called the attention restoration theory. Rachel Kaplan at the University of Michigan says “soft fascination” with the beauty and mystery of the natural world draws us in. Nature, she says, is “enticing but not demanding.” Neuroscience research by her student Stephen Kaplan shows that looking at nature pictures let the hard-working executive function parts of the brain recover, compared to looking at urban landscapes.

Emotion scientists like the GGCS’s own Dacher Keltner believe there is something else going on as well: awe.

That’s the feeling we get from encountering something vast and wondrous, that challenges our comprehension. In an awed state, our jaw drops and we get goose-bumps. But more than that, we have the same physiological effects we see in forest bathing, where heart rate and blood pressure drop. Beyond the physiological, there are prosocial effects to awe: less concern for self, increased generosity, and more cooperation. This might be why research suggests there is less violence when trees are incorporated into low-income housing developments.

Researchers from Finland suggest that five hours a month is the minimum to have lasting effects (though you should leave the technology behind, or at least keep it in your pocket). It doesn’t have to be the forest; water, even urban parks, can be healing, too.

For those with the resources, I prescribe breaks to a quiet cabin or tent for at least three days, once or twice a year. I also recommend house plants for home and office, microbreaks where you stop work to look out the window, or a couple short walks even if it is in an urban environment. If all else fails, there are always nature videos, which have been shown to have positive effects. A walk with a friend outside is a  ‘three-fer’: exercise, friendship, and nature all at once.

Access to the natural world is far from equitably distributed. While green space is foundational in public health and urban planning, my country, the United States, is far behind Japan, Korea, Singapore, and many European countries in efforts to integrate this idea into our society.

I see the effects of this lack of access every day. Last week, I was taking care of Ms. S., a 58-year-old woman with mental health and mobility issues complicated by poor social support. She came to the hospital with abdominal pain. Sitting down and talking to her, I could see her mood and isolation were her biggest issues.

Notes in her medical record recommended psychiatric care and medications, but I started with a different approach.

“Well, I loved my flower boxes I had outside my apartment,” she said. “I planted herbs and flowers. Tending the plants made me feel good, but the manager said it was a fire hazard and I have hardly been outside since they hauled them away.”

Her comments are in line with data on the benefits of touch—hands or feet in the dirt—and well-being. There is also a large body of research on the positive social and health benefits of gardening. Before she went home, our team gave her resources about community gardens, and I gave a prescription to bus to Redwood Park and the lake. While that felt insufficient, at least she felt buoyed by the idea that our health care team felt her garden was as important to her health as she did.

This is a lesson we all should learn from Ms. S.: Don’t underestimate the benefits of engaging with nature. Even if governments and institutions in the U.S. don’t get it yet, individuals can make a difference. Through efforts of hard-working citizens, vets can get outdoor therapy for PTSD. The SHINE program in the Bay Area is one of several park-health care collaboratives that get kids out of their city lives and into nature once a week. We should all be inspired by these efforts and find ways to advocate for green access as best we can.

Coming out of this long public health crisis, we should cherish all the good we can. I have tried to make this cognitive shift: Every episode outside is an opportunity to access the healing power of nature. I try to see each tree as an incredible living being and forests, the shoreline, and even my neighbourhood park as sacred sites for communing with the wondrous natural world and restoring my body and mind.

When I watch the sun set, I think of what it did for Mr. T.

How do you interact with nature? We’d love you to share your favourites with us.