Short Term Memory Loss. Let Me Sleep On That. 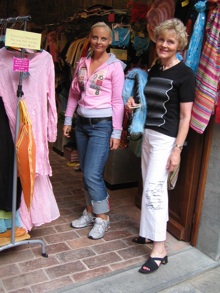 I’ve just come back from the store where I spent nearly two hours trying to decide which skirt to buy.

Would you believe it?

I narrowed it down to two but then my brain seemed to go completely blank and I couldn’t remember all the items I already owned that would go with each skirt.

So, I left the exasperated assistant with the items to put on hold for me until the next day. And, you know, that’s often the best way for those really big decisions!

With a bit of space to think and recall, I could begin to organize combinations of garments in my mind and, even better, after a decent night’s sleep, my mind was clear. I didn’t need either of them because I found a skirt in the wardrobe that I had scarcely worn that was a better match.

Well, I guess this doesn’t count as a life-changing event but it reminded me that sometimes, under pressure, it is hard to sort out and combine all of the thoughts you have that are relevant to the problem in hand.

That sleep I had was important in helping me sort out what I wanted to do as well. It was no surprise, then, to find out that sleep researchers believe that for every two hours we spend awake, the brain needs an hour of sleep to figure out what all the experiences we have engaged in mean.

Sleep not only helps store facts, it also helps make connections between them. It’s the time when the brain’s two memory systems—the hippocampus and the neocortex—”talk” with one other, which plays a crucial role in constructing meaning in our lives.

Conversely, sleep-deprivation experiments have shown that a tired brain has a difficult time capturing memories of all sorts, and an even tougher time making decisions. We need our sleep.

“Relational memory is a bit like solving a jigsaw puzzle,” explains senior author Matthew Walker, PhD, Director of the Sleep and Neuroimaging Laboratory at BIDMC and Assistant Professor of Psychology at Harvard Medical School (HMS).

“It’s not enough to have all the puzzle pieces — you also have to understand how they fit together.”

Researchers Walker and Jeffrey Ellenbogen, MD, a postdoctoral fellow at HMS and sleep neurologist, hypothesized that relational memory develops during “off-line” periods and that, like procedural memory, it would be enhanced following a period of sleep.

They tested 56 healthy college students, each of whom was shown five pairs of unfamiliar abstract patterns — colourful oval shapes resembling Faberge’ eggs. The students were then told that some of the patterns were “correct” while others were “incorrect,” but were not told that there was a hidden “hierarchy” linking all five of the pairs together. The three groups were then tested for their understanding of the larger “big picture” relationship between the individual patterns. The results showed that the students who had had periods of sleep between learning and testing, significantly outperformed the other groups.

“This strongly implies that sleep is actively engaged in the cognitive processing of our memories,” says Ellenbogen.

“Knowledge appears to expand both over time and with sleep.”

Walker added, “These findings point to an important benefit [of sleep] that we had not previously considered. Sleep not only strengthens a person’s individual memories, it appears to actually knit them together and help realize how they are associated with one another.”

And this may turn out to be the primary goal of sleep: You go to bed with pieces of the memory puzzle, and awaken with the jigsaw completed.”

Do you have stories or tips to share with us?