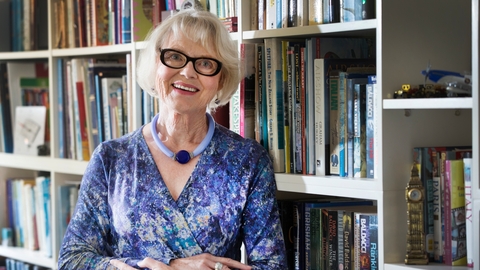 Gillian Eadie says people must challenge their brains every day to look after their memories. Photo / Nick Reed

1 Why did you set up the Memory Foundation?

As an educator, thinking skills have always been my passion, so when I read my sister’s research on memory I thought, “This is too good just to leave inside a thesis.” I was retiring as principal of Marsden School in Wellington so we worked together to translate Allison’s science into simple, practical activities, neuro-games, courses and books. We aim to teach as many people as possible how to build brain resilience and reduce memory loss while they’re still in their 50s and 60s so they can live independently into old age.

2 What were the key findings of Allison’s research?

Allison’s PhD research into the effects of ageing on memory in 2008 was groundbreaking and attracted international attention. She identified that all six memory skills can be enhanced by practicing memory strategies and adopting a brain-health lifestyle. We developed neuro-games in partnership with the University of Auckland’s computer engineering and robotics lab which are now on the healthcare robots being trialled in seniors’ homes in Gore.

3 Why can’t I remember where I put my car keys?

Around the age of 50, brain changes happen to us all. People think they’ve lost their memory but they haven’t. They’ve just lost some of the agility in connecting to stored information. All five of your senses are gathering information constantly and your brain’s just waiting to know, “What it is you want me to remember?” You just have to pay attention and connect it to something you already know. From there your brain will process it into the long-term memory and you’ll be able to retrieve it. If you don’t pay attention and attach memory traces, it simply disappears. Building a robust cognitive reserve while the brain is healthy also provides a buffer against memory disorders later in life.

4 What do you tell people about ageing?

Don’t say, “Oh, I’m having a senior moment,” or joke “I’ve got early onset Alzheimer’s”. Don’t let your brain off the hook. Getting older is not a time for sitting back and letting things go by. You need to keep your brain working for you right ’til the end. Chase that memory and challenge your brain every day. Only one person can look after your memory. I can’t look after it for you.

5 You’re a teacher and your sister Allison’s a scientist. What was it like writing a book together?

We’ll often laugh because I’ll ask her for a succinct answer to a scientific question and she’ll say, “Well it can’t be done. The answer just isn’t succinct.” I have a way of breaking things down to make them easy for people to understand but that’s all absolutely based on Allison’s understanding of neuro-science. She’s really quite amazing.

6 Did your parents have high academic expectations of you both?

Yes, Mum particularly. She was a fierce Scot from that era when you went to work to make your way in the world, but she never stopped educating herself and was determined that both Allison and I would be educated too. If you only got 96 per cent, well what happened to those other four? That was the approach. We were always reaching for that little bit more. It never occurred to me that there was anything I couldn’t do. Even with the Memory Foundation we’ve had plenty of people say, “What on earth are you doing this for? You’re supposed to be retired.” You just can’t help yourself really.

7 What about your dad?

My love of fast engines comes from my dad, who was a World War II aircraft engineer. I loved going to the speedway as a child. I had a little red MG I used to drive up and down the West Coast when I was the sole charge speech therapist for the area.

8 How did you become a pilot?

When we lived in Greymouth, my husband Don was down at the local having a few drinks and wondering what to get me for my birthday when a flying instructor suggested lessons. So he did. It was just wonderful taking off at the end of the day after Don got home from work. The children were little then. I’d fly all along the West Coast into the pink sunset. The houses looked like monopoly pieces. Anything that was getting you wound up down there you’d just think, “No, it’s all tiny.”

9 Did you always want to be the principal of a private school?

It wasn’t part of the game plan. Opening doors for young people was always the driving force for me. I taught for many years while the children were at school and a friend said to me, “When are you going to move on in your career?” My husband had sold his family’s transport company and I’d supported his career and commitments over the years, so we decided it was my turn. I was appointed as principal of St Oran’s College and we moved to Lower Hutt.

10 Do you prefer state or private schools?

I like having the freedom to weigh up what’s possible for a young person and I think there are more opportunities to do that in an independent environment. Although when I taught in state schools I certainly didn’t feel hampered by regulations. I was always looking for innovative ways to teach. You can set a simple maths problem but out of a class of 25 students there could be 7 or 8 different ways of approaching it. We all come to problems from different angles. That’s why I’ve always pushed to get more IT into schools because it encourages innovation and recognises different strands of thought. My schools have all won awards for computer excellence.

Oh, I love it, but I do get terribly frustrated sometimes. I think, “I’m an honorary fellow of the New Zealand Institute of IT Professionals and I can’t even fix the layers of my Photoshop, for crying out loud.”

12 Your company received training from CDC Hi-Tech and funding from the University of Auckland’s SPARK programme. How is the business going?

Having run schools for 20 years, I thought starting a company would be a breeze, but there was a surprising amount I didn’t know. I’ve had to improve my skills in things like accounting and marketing. You think the world is just waiting to hear your message but actually you have to build trust. I think people recognise now that we are authorities in this area and we know what we’re talking about. Our books have sold in over 40 countries. There are quite a lot of self-help books out there but they don’t offer the practical solutions we do. Once people know they’re actually in control of their memories they gain confidence and hope for the future.