Why does Alzheimer’s affect people differently? 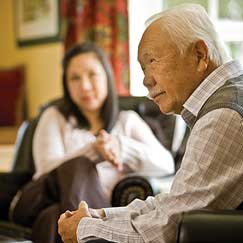 QUESTION: Both my mother and my father-in-law suffer from Alzheimer’s disease. We’re told that they both seem to be at about the same point in the physical progression of the disease. But my father-in-law has remained fairly lucid, while my mother is more confused and forgetful. What could account for this?

ANSWER: The tremendous number of nerve cells and connections between cells in a healthy brain provide a seemingly infinite capacity for processing information. It also provides a margin of safety in case some cells are damaged. In Alzheimer’s disease, however, the wholesale destruction of nerve cells eliminates this safety net, especially in the brain areas involved in memory and cognition.

But as you’ve noted, the disease doesn’t always affect people in the same way or with similar severity. Consider two older people with the same amount of Alzheimer’s disease–related plaques and tangles in their brains. One person has some memory miscues now and then, but continues to lead a relatively normal life. The other has the severe loss of memory and other cognitive deficits that typify Alzheimer’s disease.

Why the difference? One explanation is that they had differing amounts of cognitive reserve. Cognitive reserve can protect you from the effects of Alzheimer’s and other diseases that affect the brain.

(We love this explanation! Memory Foundation)

Cognitive reserve can be thought of as having two parts, hardware and software. The hardware consists of brain cells, or neurons, and connections between those brain cells, which are called synapses. The theory is that people with more brain cells and synapses at their disposal are better able to maintain cognitive functions even after important brain cells are damaged.

The software is the brain’s capacity for finding alternative circuits and neural networks if disease or injury is blocking the usual ones. People’s cognitive abilities can stay roughly the same if their brains are adept at these workarounds.

Brain reserve capacity — the term sometimes used for the hardware — is, in large part, genetically determined. But the human brain is capable of generating new synapses and neurons throughout life, and the input of stimulating experiences has been shown to alter brain structure.

There is plenty of research to back up this idea. Brain scans of people learning to juggle show increases in the size of brain structures linked with the visual processing of movement. MRIs of the brains of London taxi drivers have shown that they have larger-than-normal posterior hippocampi, an area of the brain involved in spatial memory.

Formal educational achievement is an important factor, but virtually any mentally challenging or engaging activity seems to have a positive effect on cognitive reserve.

Some research has found that crossword puzzles, Sudoku and other “brain exercise” activities have a narrow effect: That is, if you do Sudoku puzzles, you become better at doing Sudoku puzzles and little else.

But a study showed that Sudoku and other puzzles also made older people more open to trying new things, so there’s still much more to be learned in this area.

Physical activity may be just as important as mental activity for brain health and building up cognitive reserve. Dozens of studies have shown it to have a pronounced effect, and aerobic exercise that gets your heart rate up may be especially important.

Exercise seems to affect the brain directly, increasing the number of synapses and enhancing the action of neurotransmitters, the chemicals that make brain cell-to-brain cell communication possible. It also increases the production of brain-derived neurotrophic factor (BDNF), a “brain juice” protein that promotes the production of new brain cells and the survival of existing ones.

Physical activity also has indirect effects. If your heart and lungs are strong and healthy, more oxygen-rich blood will circulate to the brain. And exercise controls and reduces the risk of conditions like diabetes and high blood pressure that can put brain cells in harm’s way.

For the brain and the rest of the body, the wisdom of Hippocrates may be as true today as it was 2,400 years ago: That which is used develops, that which is not used, wastes away.