The key is to get moving. 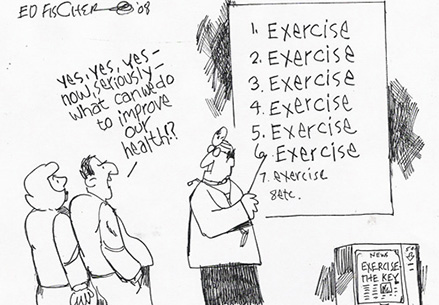 It was once thought the brain could not create new cells. You simply used what you were born with, and if they died through age or injury, that was that.

Scientific studies now show that the brain can continue to produce new cells, called neurons, as we age, even late into life, through a process called neurogenesis.

How well the brain does this — and how we can enhance it — may solve the puzzle for improving age-related memory loss and perhaps prevent dementia, including Alzheimer’s disease

“While most brains can develop new cells, the goal for science now is to find the best ways to do that,” says Dr. Rudolph Tanzi, a neuroscientist and co-director of the McCance Center for Brain Health at Harvard-affiliated Massachusetts General Hospital.

The average brain contains about 100 billion brain cells, most of which were formed before birth. In the earliest stages of childhood, new brain cells continue to be made at a brisk pace. Over the years, neurogenesis gradually declines, but the process doesn’t stop even into older age.

That’s especially true in the hippocampus. There are two of these small, seahorse-shaped regions in the brain. One lies within the left hemisphere and the other in the right. They are responsible for learning and storing memories.

“There are other brain regions that also produce new brain cells, but the hippocampus appears to be where much of the activity takes place,” says Dr. Tanzi.

Research has found that the hippocampus can produce anywhere from 700 to 1,500 new neurons each day. That may not seem like much considering the vast galaxy of neurons, but even this small number has value, as it supports the existing neurons.

“The thinking is that if you can increase this number even more through neurogenesis, you could intensify the hippocampus’s primary function and improve how people learn new information and access short- and long-term memory,” says Dr. Tanzi.

Scientists have explored several specific questions about neurogenesis. For example, what exactly “turns on” neurogenesis in the hippocampus? What effect does it have on memory? And perhaps most important, is it possible to increase neurogenesis to improve cognition in people with Alzheimer’s?

Unfortunately, human studies on neurogenesis are limited. Much of what we know about it comes from animal studies. But here is what is understood so far, and how it may relate to humans.

In one study led by Dr. Tanzi, researchers used drugs and gene therapy to induce hippocampi neurogenesis in older mice who were genetically modified to develop Alzheimer’s to see if ramping up the production of new brain cells would slow or reverse the disease.

They found that the animals’ condition did not improve. “While drug and gene therapy helped make new neurons, they eventually died like other existing neurons before they could make any kind of lasting impact,” says Dr. Tanzi.

Next, they took a different approach and explored whether exercise could trigger neurogenesis — and, if so, what lasting effect it could have. (Scientists have already found a strong link between increased aerobic exercise and improved mood in adults.)

Here, Dr. Tanzi and his team put healthy young and old mice through exercise routines on a running wheel. Aerobic exercise not only induced neurogenesis in the mice, but also increased what’s known as brain-derived neurotrophic factor (BDNF). BDNF is a protein found in the brain that plays a key role in nerve health. “It helps neurons grow and survive,” says Dr. Tanzi. “It’s like fertilizer to help plant seeds grow.”

Follow-up research has supported the exercise-neurogenesis link. One study found that adult male rats that did aerobic exercise for eight weeks had two to three times as many hippocampal neurons than rats that did no exercise. Besides producing BDNF, aerobic exercise might help increase the liver’s production of an enzyme called Gpld1, which also may assist with neurogenesis.

Even though these findings were from animal studies, Dr. Tanzi says people could gain the same brain benefits through aerobic exercise.

“Right now, there is no substitute for regular exercise to help with neurogenesis,” says Dr. Tanzi.

Yet it’s not clear what kind of exercise works best, nor how long and how much is enough. Until those questions are addressed, Dr. Tanzi suggests aiming for the recommended 120 to 150 minutes of moderate-intensity exercise per week. “Anything that gets the heart rate up, like using a treadmill, cycling, or power walking, is ideal,” he says. “If it works the body, it’s great for the brain.”